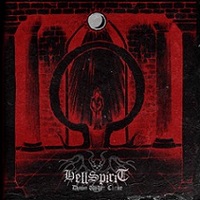 Let’s start with the bottom line: we need more bands like this nowadays. Finland’s blackened death cult metallers, Hellspirit, come from the corrupted world of drenching themselves in blood before going on stage in old warehouses crafted into ghetto venues. They’re chockfull of hell and seeping with spirit. It’s easy to see why they’re called Hellspirit, that’s for sure.

The 2014 release of their long-awaited and long-worked first full-length, Dawn Under Curse, marks the band’s ten-year anniversary. It’s pretty impressive how they built their reputation over the years having only two demos and a split to show for, until now that is. After listening to Dawn Under Curse once or twice, you’ll catch on to the warlike marching theme that ties together the songs. The first song, “Call to Arms,” begins with foot-stamping stomps of a march and the last song, “Blood and Metal,” goes out the same like an army proudly leaving behind a bloody battlefield. The best thing to do is set the album on repeat and listen to the last song circle back into the first song. You know what they say, evil never rests.

“Weak flesh, Filthy Blood” is valiantly energetic and strongly captivating from the very start to the end with skin-shredding vocals, ground-shaking drums, gunfire guitars and bone-smashing bass. “Unholy Redemption” has a very different structure that gradually crawls higher in power but one must be patient when taking in its enrapturing texture, starts off with an atmospheric intro leading into a short riff conversation and bam, we’re there at Arrrgh!

Dawn Under Curse is a very solid and robust album for having only six tracks and running not even forty minutes. Plus, it’s easy to repetitively listen to it. All this crushingly fierce chaos will make anyone want to jump onto their feet and crash into the malicious crusades of Hellspirit. Better yet, just go on and dive into the pit of fire they call music, it’s even hotter than their so-called six-hundred and sixty-six celsius degrees rehearsal pit.