Hellkeeper – A World within Flesh (Self-Released) 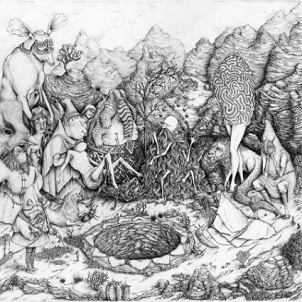 Relative d-beat blackened hardcore newbs Hellkeeper provided a rather stark quote in their artist bio: “The album is about wanting to live in a dream world because reality is too painful.” Such a quote seems more fitting for the denizens of woe-is-me Goth or post-black metal outfits who take themselves too seriously, but across the band’s A World Within Flesh full-length, you get the sense Hellkeeper (who hail from New York State), on the level, have the proper amount of emotional mojo to back their frenetic music.

Perhaps more hardcore than we’d initially surmise, the manic, yet cohesive fashion of Hellkeeper’s compositions finds the band in striking distance from black metal blasts to HC moshers, like on “Drown,” or the noise-laden “Quietus.” As is the case, the songs here move in and out, operating in quick dices, like “Winter,” which heads-off a brazen opening run only to head off into spin-kick ready territory. Elsewhere, “Threadbare” allows for some clean vocals from Paul Butler to make an appearance (more, please), while “Simulacrum” closes the album out in brash, even savage fashion.

Hellkeeper demonstrate on A World within Flesh they are equal parts hardcore heaviness and extreme metal forcefulness. Such a combination is hard to master. Hellkeeper are well on their way.