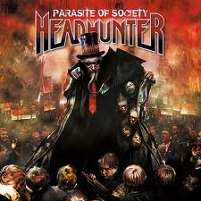 Defunct since the early 90’s, Headhunter made nary a dent in the American metal scene by the time Destruction’s Schimer was ready to hang up his studded belt and take some time away from the biz. With Destruction very much an active band, the move to resurrect Headhunter drew some raised eyebrows. After all, the difference between the two bands

isn’t that large – Headhunter is more or less a more less-frills Destruction, created in order to fulfill Schimer’s creative needs.

Joined by now former Stratovarius drummer Jorg Michael and guitarist Schmuddel, Headhunter is retains some traditional thrash elements, yet comes across as too safe and predictable. Tunes such as the groovin’ “Silverskull,” “Doomsday for the Prayer” and especially “Read My Lips” (love the opening riff) are what you’d expect from a trio of thrash veterans and are buoyed by a mild power metal slant, which most likely relates to Michael’s involvement with Strato.

A cover of Skid Row’s “18 and Life” is a throwaway number, while the call-and-response “The Calling” and “Backs to the Wall” appear to be created for the sake of playing live, which when translated onto CD, fall a little short.

As workmanlike as Parasite of Society is, it would be a shock to see something different. The German metal scene gets what it wants and in the case of Headhunter, it got paint-by-numbers thrash, a more restrained Destruction, if you will. Good stuff, but hardly worth sticking one’s neck out for.