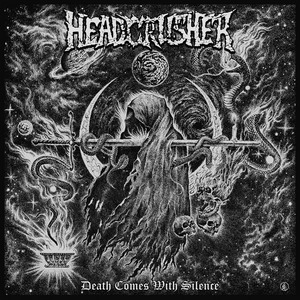 Texas-based extreme metal crew HeadCrusher may leave you with a case of head-scratching after you begin listening to their latest album Death Comes with Silence. Not in a bad way mind you, but in the sense that you really can’t lump them into any one particular pile in the genre game. They play their hand in a grey area somewhere between the ines.

Line up some death metal aggression, some of the urgency of the more metallic hardcore acts, the intensity of thrash, and you’ve got at least a starting point for HeadCrusher’s approach. It’s almost easier to describe in terms of the near-constant fury (“Trails of Devastation” offers a few moments of melancholy) and gritty atmosphere that the album portrays than to attack it any other way. Caustic and immediate riffs sometimes lined with groove chart much of the landscape, with some fiery solos also leading the charge on occasion (see “Fatal Error”). Some darker, and lurking in the shadows type moments can spring up (“Black Hearted Demons”), but one can expect a more or less straight-forward attack. In fact, that’s the one gleaming flaw when it comes down to it. HeadCrusher, while being hard to define, tend to play most of the tracks with the same level of gusto and pizazz. Given the mostly barked vocals and similar pacing, it makes the album bleed together more than one would like.

Despite some blurring towards the end of the album, those in seek of some pissed-off malevolence will get some use from Death Comes with Silence. Some more experimentation a la “Trails of Devastation” or “Black Hearted Demons” may evolve the band’s sound, but potentially at the cost of some of the visceral assault. Therein lies the conundrum of extreme metal.