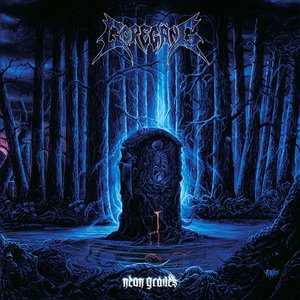 What happens when you get two dudes that play a lot of extreme metal together and have them start another group with just the two of them? Goregang is the product of Taylor Nordberg and Jeramie Kling (who both play in The Absence, Ribspreader, Infernaeon, and more), and its meant to scratch that old school itch. There’s a few surprises to be had with Neon Graves, and there’s also plenty of killer music to catch your fancy.

The most appealing aspect of Goregang is that of its many grooves. Something that these old school acts sometimes try to skimp on, in attempt to bring the more brutal revivalist material they can must, but Goregang’s strength lies in keeping each song as catchy as it is heavy. There’s a wide swath of old school influences too, rather than simply keeping to one of the usual geographic areas (Sweden, Florida, etc). You can hear these sort of things pop up in the music, but they don’t keep at it in one pace for so long that you start predicting what will come next. Instead, you’ll likely be smiling at the punchy riff that is currently moving through the speakers (a few major winners to be found in “Feeble-Minded Rash” and “Weightless Sentinels”). Some gang vocals occasionally provide a shift in tone as well (alongside some crust/punk attitude), and provide some of the most interesting movements from the norm with these types of bands.

Oftentimes with the old school sound, it’s far more effective to rely on good riffs instead of covering new ground. It’s necessary in order to pay some homage, but when bands can do that as well as inject some of their own personality into the mix, it’s a winner. Neon Graves gives Goregang some solid footing to further themselves next time around.