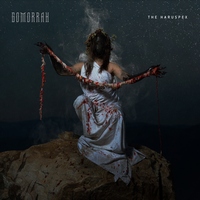 Easily taking the first step in the creepy and cool cover art contest of 2016, the music of Gomorrah’s second full-length, The Haruspex holds tight to the potential given by its imagery. Of course, it may be hard to keep up, given the sheer number of “Gomorrah” titled bands in the metal genre (for obvious reasons), but British Columbia’s Gomorrah keep their metal deathly, simultaneously providing a modern approach while keeping the door open to the past with one foot.

The Haruspex is intense, no questions asked. This is death metal after all, but the combination of the tone of the guitars and the menacing and upfront guttural vocals is well done. The guitars have a low and churning approach (“The Mark of Veritas”), which gives it a more modern feel, but the music itself does elicit a Bloodbath or Cannibal Corpse feel, with some more modern Behemoth tossed in on the intensity front (“Crowns of Flesh”). You won’t find much in terms of technical wizardry, but what Gomorrah is strongest at is the writing of “songs.” For a straight-up death metal record, there is a pleasant amount of diversity in the songwriting department. There’s some atmosphere from time to time, some real bone-crunching riffs that flex heavy muscles, and some explosive blasts of speed to be had, giving the album a solid flow and avoids the “10 variations on the same track” feel.

Well-written and memorable death metal that gets the job done is the name of the game on The Haruspex. A welcome start to the 2016 in terms of atmosphere and intensity.