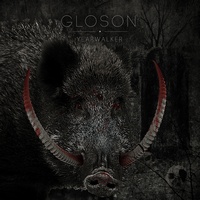 For post-metal, it’s always a matter of dynamics. The bands who prefer to lumber their way through this style without opting into the quiet/loud/here-comes-the-melody template usually don’t have much leverage, or viability, for that matter. ‘Cause frankly, hearing recycled Neurosis riffs on repeat doesn’t really tickle one’s fancy. The upper-tier of post-metal, on the other hand, have it down to a science, where said monolithic riffs are almost always complemented by a melodic drop-out. Sweden’s Gloson are yet another entry into the post-metal derby, and by all accounts, appear to have their noggins on properly when it comes to this approach.

Yearwalker is the band’s debut EP, released just a year after their formation. Perhaps the only member of note would be guitarist Christian Larsson, who mans the bass position in the Swedish Shining. Nevertheless, Yearwalker is a four-song outing under the “boar metal” banner, which based on the EP’s cover, makes sense. In turn, the burly, rather ugly riffing MO the band has on cuts like “Årsgång” and the ensuing “Sirens” pale in comparison to the vibrant “The End/Aftermath,” where said most-excellent melodic cut-away happens at just the right moment. Most notable would be “The Aftermath/Beginning,” which further expands upon the band’s melodic core, developing into a chiming, atmospheric cut that reminds of Cult of Luna at their peak.

There’s not much in terms of new avenues to gleam for Gloson and Yearwalker. Yet, it’s a passable shortcoming given the promise displayed on the EP’s last two cuts, where upon the band would be wise to travel similar paths in the future. The Swedes do know how to their post-metal, though.