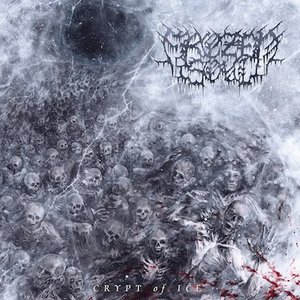 Though many associate coldness and ice with that of black metal, there’s no stopping death metal from going in the same direction. In fact, it’s what propels Texas act Frozen Soul forward, from the shivering cold artwork to their chilly version of extremity. It’s a welcome concept in a land that’s usually red with gore and violence, and Frozen Soul takes the thundering approach of older acts like Bolt Thrower and Obituary and locks them in a freezer for safe keeping.

This is more methodical and slow moving death metal, instead of being a raging inferno. It’s a musical piece that fits well with the band’s concept too. While there’s still plenty of fury within the band’s mid-tempo stomp, it’s rare that they really hit the gas pedal too hard. So the biggest takeaway to Crypt of Ice is the musicianship itself – and it shines. The songs are undeniably heavy, and the more sluggish tempo allows the riffs to really take hold of the listener. The slow and monstrous knuckle-dragging ones of “Hand of Vengeance” are a perfect example of this. Bludgeoning in their sound, but headbangable and memorable as well. The riffs have a dark and eerie feeling as well. It captures that old school death metal spirit, and adds a sense of melancholy and hopelessness to it at the same time. “Wraith of Death” and “Encased in Ice” both showcase this aspect, with the latter using some slow moving, churning riffs to give you that feeling of being carried away into the cold and having nothing but despair by your side.

An excellent reminder that death metal doesn’t have to move at the speed of light in order to provide a bruising, Frozen Soul crush the listener with pummeling mid-tempo or slow things down to an agonizing crawl. Gloominess and despair reigns above all, and Crypt of Ice yearns to grind you down with suffocating darkness.