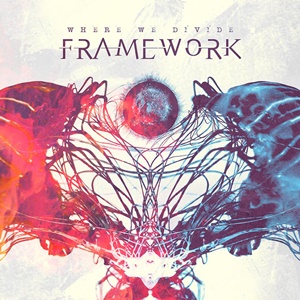 As a melodic death/thrash metal band from New Jersey, Framework has been making headway in the scene through a strong debut album A World Distorted released in 2014, plus subsequent touring spots including an early 2015 East Coast run with Armageddon. Although progress was slower than anticipated for the follow-up as the members all dealt with personal/family issues, Where We Divide stands as the newest offering – a five song EP illustrating the progressive depth and willingness to expand their horizons for the sake of developing their own take on the genre.

Stylistically the foundation of the group’s sound comes from a European slant – incorporating heavy, earthshaking riffs, unyielding tempos, and caustic vocals that match the musical savagery. It’s easy to hear similarities to classic Slaughter of the Soul/At the Gates, Soilwork, and Meshuggah when airing the stacked guitar assault within “An Odyssey Unwinds” or the shape-shifting action that unfurls over the course of the 6:45 closer “A Passage in the Waning Light”. At other times though, Framework will drop a dynamic bomb so to speak – riding the crest of a specific, lower end groove in that Gojira-like rhythmic manner, or just taking the distortion out of the game and engaging in a simplistic, clean passage that adds beauty or tranquility to convey that opposing emotion. The ambient nature of the opening instrumental “The Departure” sets the stage for the title track – the highlight of the EP due to its monster main guitar/drum hook and alluring keyboard backing. It’s hard not to get swept up by all the massive chugging and twists contained within the four minutes, 15 second track – as vocalist Glenn Ferguson spits out his venomous words like the best melodic death singers going today (‘we destroy ourselves’ a repetitive refrain that reverberates).

The guest solo spot for Chris Amott on “Awakened by the Dawn” is icing on an already delectable offering – while the Gustavo Sazes artwork conveys the progressive abstraction of Framework brilliantly. The band upped their game a hundredfold on an already strong foundation – Where We Divide is the type of EP that in a just world gains massive acceptance not just from the melodic or progressive death/thrash communities, but new followers willing to support talent and hard work.