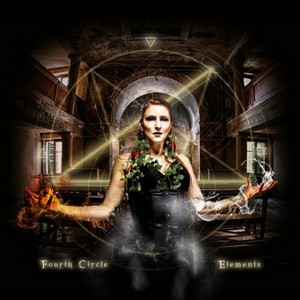 Sometimes life needs a little bit of bombast. Some soaring through the clouds and into the sky following some death metal that culls itself from the most depraved and cavernous. Perhaps that’s one of the reasons that symphonic metal has had its share of fans that have stuck with the genre. French female-fronted act Fourth Circle fall squarely into that category with their second album, Elements, which emits solid vibes but never really escapes the sound of the masters.

Fourth Circle deliver the quintessential version of symphonic metal. Big riffs, big synths, and big choruses. But when delivering bigger and bigger, it’s also important to know how to keep from overdoing it. Something that Fourth Circle does manage, sometimes by going a little bit heavier (a few raspy screams excellent accompany these – see “Signals”). Some extra punchy in this genre is often a great equalizer, and can pull some who may not listen to the genre as often. Sometimes one can avoid overdoing it by just enjoying the bombast for what it is, and with upbeat and addictive tracks like “Water’s Child” and “From Moon” make this easy to get behind. Of course, what would an album like this be without a standout ballad, and “These Walls” gives Audrey Adornato a chance to shine behind the microphone. If there’s one drawback to the album, it’s that it does stick to the genre conventions for the most part but given the young age of the band, it’s more forgivable at this stage.

Fans of Epica and Within Temptation should find Fourth Circle to be right up their alley. While it’s standard genre-faire, the songwriting potential is there should the band decide to expand their palette with their third album.