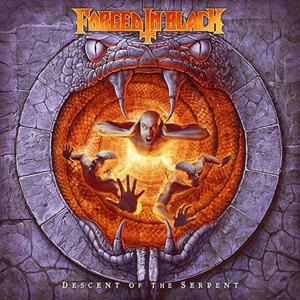 Wisely changing their name from Merciless Fail who were together from 2007-13, Forged in Black come from the UK, having released a self-titled full-length plus three EP’s independently prior to signing with Fighter Records for this second album Descent of the Serpent. Aiming to reinvent traditional heavy metal with a power/thrash edge from a modern landscape, the quintet places a heavy emphasis on melodic versatility – as a result taking their host of influences and putting a unique side spin to establish their own stamp on things. Considering this is my initial exposure to the band, it’s evident that these musicians know how to craft engaging songs and embellish the action with killer hooks, harmonies, and accents that provide earworms for weeks and months on end.

Relevant right out of the gate, vocalist Chris Stoz Storozynski has an operatic nature to his seasoned voice, delivering bellows from the heavens during “One in the Chamber” and ascending to some Halford-esque falsetto screams during parts of the follow-up “Shadowcasters”. When the band choose to add in those power tempos and double kick activities, it adds an extra charge to the melodic twin guitar foundation Andy Songhurst and Chris Bone provide – check out their gallops and barrage of rhythm/lead complementary work on highlights such as “Vendetta” and the title track, which can be Tony Martin-era Sabbath/ Candlemass-esque one moment, then Metal Church meets Iced Earth in a UK thrash alley the next. The production has a modern potent punch, elevating a lot of the crunch factor of the riffs and snapping of the heads for the drum kit, while the gang-like vocals and occasional screams further the cause for audience inclusion. Another quality Forged in Black emphasize is those majestic riffs that against Chris’ dramatic presentation invite call and response movement – screaming, shouting, singing the musical and vocal melodies back to the band, as “One Last Sign” probably serves as the best example of this.

Even the occasional nod of metalcore screams or guitar squeals fits in context with the overall style and dynamics the band achieve from first song to last. Descent of the Serpent isn’t going to be one of those albums that wows the listener due to intricate, technical prowess or blazing speed. Instead, Forged in Black combine a traditional, doom to mid-tempo paced effort with power and thrash aspects to achieve a memorable, exhilarating and metal to the bone outing.