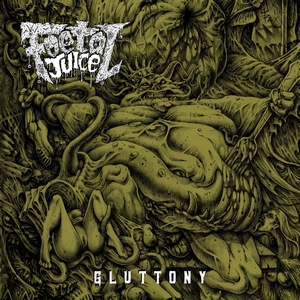 With retro-inspired death metal, there’s always a geographic angle to how a band sounds. In this case, while Foetal Juice comes from the UK, a few seconds of Gluttony will all but convince you that they have time warped from ‘90s Florida. The band has done all of their homework when it comes to consuming this particular sound, and if you enjoy that era, Gluttony will provide a feast.

Almost instantly calling to mind Cannibal Corpse and Malevolent Creation in their straight-ahead, go for the gusto vibes as “Take Your Face for a Shit” opens (albeit with a slight crust/punk-ish air to it), it’s hit the gas and go with Foetal Juice. The tempos are racing, as they should be, and the band wastes no time in cutting through the mostly 3-minute tracks. The vocals resemble more of a bark for the most part, which gives them a bit more clarity than a lower guttural (as well as personality). Once you’ve started running through the tracks, you’ll find that they stick to the mid-tempo to high-speed for the most part. While it could get repetitive, there’s enough melody and memorability to any given track to keep the party going at full steam. As one example, “Venomous Domination” features a number of tempo changes and a notable groove midway through in addition to its battering ram mentality and aggression. The energy is high, and because of the driving nature of the tracks, it’s a fun rush as you listen to it. The enthusiasm carried forward is palpable.

For this type of death metal, it just feels fun. That’s really the biggest compliment that can be given to Gluttony. One could nitpick how it’s not a unique vibe, but at the end of the day, Foetal Juice have this sound down to a tee and those who dig it are going to have a blast.