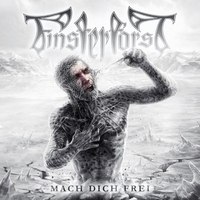 Massive soundscapes delivered with muscular aggression and refined musical textures define Finsterforst’s latest and fourth studio album. A folk metal by-way-of-black-metal band hailing from the Black Forest of Germany, Finsterforst can count the mighty Moonsorrow as their principal peer in the scene.

Building off of the success of 2012’s Rastlos, Finsterforst creates the next chapter in their tale of top-notch German folk metal. With Rastlos, we saw the band step up the atmosphere in even greater detail than displayed on the previous release (their very solid second album, 2009’s…zum Tode hin). This time around, the band keep things in largely the same vein, yet on an even bigger scale. The addition of orchestration (including brass) add a real sense of grandeur to these epics. The band, being a seven-piece, already has a huge sound to begin with, but in this studio effort the extra layers pay off big time, creating a lush and fantastic world to spend an hour in, with each listen.

One of the trademarks of the band is their accordion player Johannes Joseph, and he does a great job on this release with his tasteful use of the iconic instrument. While it was perhaps a little much in their earlier releases, things sound quite refined these days. Paired with the atmospheric layering of the keyboards, vocal choirs, and some natural sounds used as well, it really drives home the German folk element with stellar results. Lyrically, the band keep to their native tongue which only feels right in this setting. Vocally, the primary are in the standard blackened growling style, accented with plenty of powerful clean singing. The whole album clocking in at an hour and thirteen minutes, it’s the near twenty-four minute epic, “Finsterforst” that brings up the rear in fairytale fashion. Surely, one of the best songs the band has ever done.

In what is arguably Finsterforst’s finest album to date, Mach Dich Frei is a gem and should easily have the staying power to be thought of among the best albums of 2015. Sure, it’s early to say such things, but unless Moonsorrow drops their next album this year, it’s hard to see a finer release of folk/pagan metal coming…and even if they do, Finsterforst holds their own against anyone.