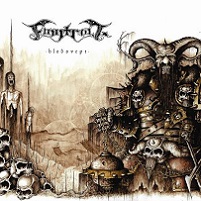 In a sense, the longevity of Finntroll has cemented the notion they’re more than just some hokey gimmick, something they were tagged with when 2001’s Jaktens Tid started gaining momentum. In truth, the hummpa metal game has always been theirs for the taking, even as Korpiklaani started running parallel to them with endless songs about booze…and booze. There’s more to Finntroll than getting wet, and on Blodsvept they emerge with what is probably their most enjoyable effort since the above-mentioned Jaktens Tid.

The album’s ridges are less pronounced than on 2010’s Nifelvind, so this raw aspect helps the ‘trolls make a beeline for their black metal roots. Of course, none of this is straight black metal, but the sideways riffing and forest dalliances are definitely in abundance. “När Jättar Marschera” shows were the action is, with just the right criss-crossing of extreme metal aesthetics, and ho-down folk elements. The same could be said for “Skövlarens Död,” which serves as a platform for vocalist Vreth to test his tongue and accentuated vocal thrusts. However, the jovial, mead-clanking angle of Finntroll heard on “Skogsdotter,” “Rösets Kung,” and “Midvinterdraken,” is where Blodsvept shines the brightest. It’s all just in good fun.

Now at 15 years of age, much is being made of Finntroll’s influence on the 00’s wave of folk-inspired metal bands in Ensiferum, Eluveitie, and Turisas. It’s certainly true each of those bands owe something to the trolls, yet on Blodsvept, the band puts on a literal demonstration of how to stay fresh, goofy, and ultimately enjoyable. Not bad for a bunch of grotesque physical giants of enormous strength and appetite. 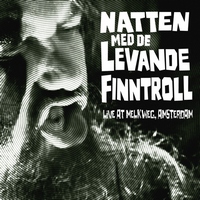