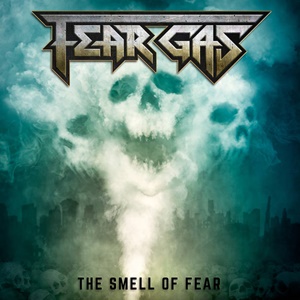 A Finnish trio with little in the way of English written background information to supply, Fear Gas seem to be on their second go around in terms of a career. Based on my detective skills, they started around 1996, finished up in the early 2000’s, and came back around a few years ago – finally putting out this four song EP The Smell of Fear. In the end, it’s all about the music, right? As such, this is a quick reminder of the power of early 80’s metal, the riffing, tempos, and melodies fusing together a raw, NWOBHM meets savage semi-thrash stance where the three-piece can be calm and focused one moment, but then turn up the aggression and distortion the next.

The breakneck guitar action and equally roaring vocal pacing makes “Insane” ideal for most Metallica maniacs to throw devil horn salutes, as bassist Janne Laatikainen adds that progressive thump for the neck breaking parts of distinction. The advanced technical prowess comes out in the almost five-minute title cut, the main riffs drifting between a Randy Rhoads-like highway lift off and this serene, clean picking verses that put Fear Gas in rarefied Squealer meets Megadeth playing fields. Drummer Tommi Palo excels at never over reaching with his fills and steady grooves, always keeping his head on the arrangement in front of him, while guitarist Valery Soroko throws in lots of power chords and electrifying leads, sometimes paying homage Stone from their home country when it comes to the spirit and execution of their songwriting. Janne also doubles on vocals – his delivery Lemmy-esque, getting done what he can through more beer-soaked attitude rather than refined, on point precision. It won’t win Fear Gas any singer of the year accolades, but doesn’t deter listeners from the catchy hooks and passion put about on the musical side.

Not a bad little EP for those who want something old school and versatile as well.