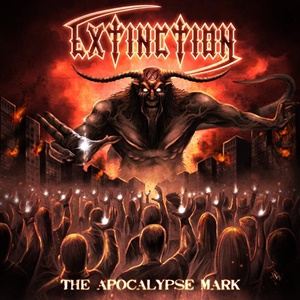 Returning for a second time in 2014 after their initial mid 1990’s run, Extinction hail from Italy and straddle the lines of groovy old school death with thrash in terms of a style. Only releasing a demo in 1996 with Progress Regress in their early development, they finally got the chance to issue a full-length with The Monarch Slaves during 2017 through German label Unholy Fire Records which included a cover of the career defining grunge hit “Smells Like Teen Spirit” by Nirvana. Moving over to Revalve Records the follow up The Apocalypse Mark is this scribe’s first exposure to the quintet, containing eight songs beyond a narrative/news soundbite intro that keep things solid and very much primitive based on their affinity for early death/later thrash affiliations.

There’s a working man’s down to earth aspect to much of the main riffing and hooks throughout the album – the band locking into a comfort zone of sorts where they hammer home rhythms and slight offshoots that make sense. The doom-like aspect of say South of Heaven by Slayer comes up in spots of the opening guitar/drum sequence for “Staged Terror Attacks” and the closer “Hidden Dictature”, the vocals from Filippo Collaro delivered in a semi-death growl manner that isn’t gurgling but more stunted and rhythmic in execution. The occasional sprinkler system-like snare/kick hits in unison with the guitars can bring certain songs to a monotonous crawl – the title track and subsequent “Mad Jack” unfortunately guilty parties of this musical maneuver, fortunately only in spurts as to not fully lose momentum. The lead breaks possess a bit of neoclassical, circular edge to elevate the main arrangements – and the transitions can hit these groove measures that like Jungle Rot or Sepultura elevate pits or audiences to rage. When it comes to the death aspects, there’s a mid-tempo, down-tuned nature to the riffs and speedier transitions for “No Crimes in Paradise” that brings classic Morbid Angel and 80’s-era Death to the table. Sinister heavy parts, crushing rhythms, and shifting tempos keep Extinction from being a one-trick pony, and that’s not easy to achieve in this genre.

The Apocalypse Mark won’t necessarily barrel people over through intricacy or technical prowess – it’s a blue-collar thrash/death effort though that we know plenty of older fans of both genres will enjoy.