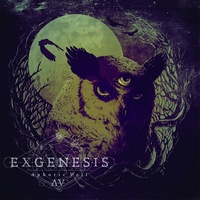 Former Slumber guitarist/current Enshine mainman Jari Lindholm is gradually becoming one of the more distinctive songwriters in the atmospheric melodic death metal field. Enshine (who should have a new platter out sometime this year) are essentially an extension of the now-defunct Slumber, whose 2004 effort Fallout is an album for the ages. Exgenesis, on the other hand, is simply an inter-continental project between Lindholm and Antithesis vocalist Alejandro Lotero, one that wisely clings to several of the sonic norms found on Lindholm’s other two bands, just without the ringing melody that is so pervasive.

Geared slightly more toward diabolical European atmospheric doom, Exgenesis roll through the five songs found on their Aphotic Veil debut EP with ample amounts of despair in the guitar department, particularly on jams such as “Aphotic” and the rollicking “Futile Horizon,” a song loaded with disharmonic guitar work not terribly removed from the prime works of Daylight Dies. Lotero doesn’t stray too far from his girthy-y bark (some clean vocals do pop up on “Futile Horizon,” though), something that serves him well on EP closer “Noctua.”

Because Lindholm is so adept at this style, a project like Exgenesis is nearly impossible to fail. Even at just five songs, there’s enough depth to warrant repeat listens, not to mention conjuring up interest for a legitimate full-length. Then again, that need should be satiated once the new Enshine hits the boards later this year. A win-win.