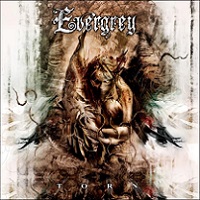 Couldn’t see this one coming. 2006’s Monday Morning Apocalypse was a commercial

and critical bomb, as Evergrey tried to clutch the brass ring and distance themselves from their progressive dark metal past. Considering the band is much more high-profile in Europe than they are in North America, the move set the band back on domestic shores a good five years, with the rebuilding effort beginning with Torn.

before them, Torn is the dreaded “return to form” album. The likes of Entombed, My Dying Bride, Kreator, and Amorphis have all taken a similar route, with varying degrees of success. It appears Torn will ultimately pay dividends for Tom Englund and crew, with the Swedes bringing back the meaty, polished crunch last heard on 2004’s lukewarm The Inner Circle.

Not as technical as one would like, Torn is a deliberate, almost predictable album across the board. Opener “Broken Wings” opens with the usual bounce that most Evergrey albums have opened with, minus the blazing guitar

pyrotechnics of yore, while “Soaked” is a crunchy, mid-paced number that highlights Englund’s passionate delivery.

The rousing chorus and groove-laden, syncopated verse of “Fear” ranks as an album highlight, same for the up-tempo and brutish “In Confidence.” The gentle melodic elements of both “When Kingdoms Fail” and “Torn” are also a welcome sight, mired in those swooning, intertwined guitar harmonies Englund and fellow guitarist Henrik Dahnage perfected earlier this decade.

“Still Walk Alone” is the overall winner, recalling the dark, sinister vibes of In Search of Truth, complete with a head-twirling main riff, massive chorus, and most surprising of all, a speed metal break section. New territory for Evergrey indeed.

As familiar as Evergrey’s career trajectory is, anyone who clamored at the sound of In Search of Truth or Recreation Day will at least give Torn a passing listen. While nowhere near as good as the two aforementioned albums, it is the step in the right direction towards negating the simple-minded approach of the band’s previous two releases, which is good enough here, and should be good enough everywhere else.