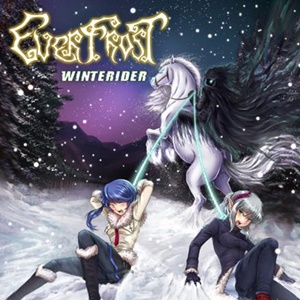 The sky is the limit it seems for diversity in the metal landscape. Artists keep pushing parameters and incorporating outside influences in the hope of establishing a unique niche in their chosen style. For Finnish fantasy metal act Everfrost, that includes combining a full manga comic into a conceptual album – which is what you’ll have here with Winterider. They’ve been active since 2015, releasing a full-length, an EP, and live album prior to this – and based on numerous playbacks, these ten tracks can gain favor from the anime/manga crowd as much as the melodic power/symphonic metal contingency. The characters from that debut album Blue Eyed Emotion come into the story on a desperate journey to survive a never-ending winter – which seems like it could be more reality-based rather than fantasy given the global climate changes as of late.

The keyboard to guitar ratio often leans heavily on the ivory scale here – keyboardist Benji Connelly layering orchestration and multiple conventional chord activities to create grandiose atmosphere. You can hear the neoclassical flourishes turned in a video game manner during many sequences of “Juhannus in January” – mirroring the bombastic choirs as if you were taking in a Broadway production, while some of the guitar tremolo lines do keep the metal in the mix. It’s hard to not feel like you are on a journey to another universe when taking in the jumpy tempos and bells/whistles throughout “Cold Night Remedy” – some of the lower, chugging guitar melodies evoking an Orden Ogan/folk-like movement. A quieter track like “Above the Treeline” allows Mikael Salo as a vocalist to execute the verses in a comfortable lower register, allowing the magnificent chorus to reach a mountain-top peak in register. Everything from electro-pop/Amaranthe-ish sequences to standard mid-tempo symphonic arrangements allow the album to flow comfortably without making the songs easily interchangeable – throwing in the occasional blast surprise during “Darkwoods Drain Backwaters” to prove Everfrost can kick into high gear musically when they want to.

It appears that many of these records chose to end the record on an epic note – and Winterider is no different with the fifteen-minute “A Whisper in a Frozen Tale”. Pulling out all the background choirs, floaty keyboard passages, and a longer instrumental sequence where acoustic guitars, orchestration, and a circular piano part convey the necessary progressive, dramatic mid-section, the double kick/tremolo heaviness ensures dynamic drive before another theatrical conclusion occurs. And you even get a Kesha cover with “Die Young” – proving you can take a recent pop hit and make it metal if you want. This scribe needs to be in the right frame of mind to take in Everfrost – as it’s certainly bombastic, cheery, fantasy-driven metal. But there are plenty of people into this genre that love metal for its escapism, and if so Winterider could be that ticket to ride.