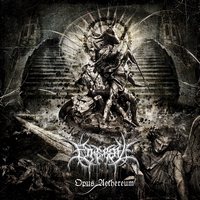 Flashback to the early ‘00s when Dimmu Borgir was practically untouchable, and bands like Old Man’s Child, Limbonic Art, and Anorexia Nervosa were all flying high with their symphonic approach to black metal. Of course, there were plenty of imitators back then which clumped everything up but many of those bands (well, even some of those listed above unfortunately) didn’t make it through the test of time. There have been notable bands since then, such as Carach Angren, but the sound has been more hybridized than remaining pure. Ethereal’s Opus Aethereum is a clear flashback.

It doesn’t take long for the Dimmu influence to settle in. There’s plenty of orchestration in each of the tracks, in that same bombastic approach. Well, perhaps a little bit more subdued but clearly evident from beginning to end. All of the tropes found in the genre present themselves along the way – relentless blasting, gloomy to furious riffing, and of course, shrieked/growled vocals with some occasional layering and some spoken word sections. There are some well-done melodic solos, such as those on “Psalm of the Deceiver,” that work as some of the highlights of the disc.

Unfortunately, this is nothing but a flashback. Ethereal doesn’t really present anything that those of us listening to black metal during that particular moment in time haven’t heard countless times in various iterations. It’s a rather well done flashback, but that’s all that one can muster when hearing the album. It’s clear there is a lot of musical skill within the instruments, but if Ethereal wants to make their mark upon the scene, they are going to have to push the envelope a bit more with album number two.