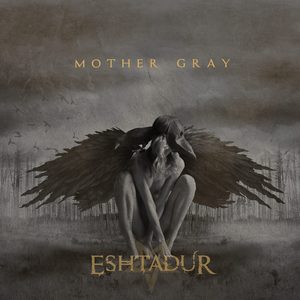 Always on the hunt for more melodic death/thrash that has no problems going straight for the throat but utilizing a bit of melody, Eshtadur’s Mother Gray certainly seemed to fit the billing. Staying afloat for twelve years at this point, somehow they’ve ducked this scribe’s radar, but this third full-length offering is the perfect jumping in point for those looking for metal at the higher end of the velocity spectrum.

Eshtadur seems to be at their strongest when they just flat-out hit the gas pedal. “Time Hole to Paris” is the standout in this regard, with thrash-intensive riffs that howl and groove in the same manner as the aforementioned Carnal Forge or early Soilwork. “Heavens to the Ground,” “Plaguemaker,” and “Cornered at the Earth” also benefit from a healthy dosage of speed, and also weaving in more mid-tempo melody work that does catch the ear nicely. But the band isn’t done quite yet, because there is another piece that’s brought in with occasional symphonic enhancement. A more (melodic) black metal vibe permeates “Desolation” and “March of the Fallen,” with some bombastic material trading blows with melodic death riffing and some gloomy doom marches. It’s an interesting contrast, but unfortunately it doesn’t reach the same compelling level as their more blistering efforts. On a fun note, the band takes a stab at Survivor’s “Burning Heart” to end the album. It effectively takes the spirit of the original and “metalizes” it, and it certainly doesn’t hurt to have Bjorn Strid handling the clean vocals.

An interesting dichotomy of ripping death/thrash with melodic black/doom on the side, Mother Gray casts its nets far and wide. Eshtadur comes out winners in the end, even if a few tracks don’t seem to have quite as much charisma as the rest. Some further experimentation should remedy that with their next release.