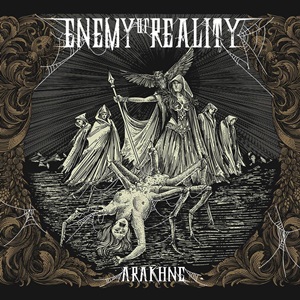 Symphonic metal assuredly seems the hottest sub-genre going these days – especially given the steady sales around the globe, pushing the veterans to theater and mini-arena headlining heights plus higher festival billings. Although a relative newcomer to the scene since their 2013 inception, Greece’s Enemy of Reality have made quick inroads through their debut album Rejected Gods and a broad slate of show/festival appearances from the UK and Belgium to Romania beyond their home country. Arakhne as the follow up sets the stage for the quintet to establish their own protocol- giving the right guest appearance support in multiple regards while keeping their sights on a progressive vision that is atmospheric, dramatic, and intriguing.

A conceptual record surrounding an ancient Hellenic myth of the Arakhne maiden who was turned into a spider by Athena, the songwriting reflects the diverse lyrical concept that plays out from beginning to end. “Time Immemorial” containing reverberating keyboard swaths and extreme male growls against a heavier, mid-tempo guitar charge as the orchestration builds to a crescendo. The follow up “Nouthetisis” begins in Greek language chant form before the back and forth heavy to melodic/operatic guitars and vocals take command – Illiana carefully switching between quick soprano-oriented lines and lilting, angelic passages. Guests include the seemingly ubiquitous Fabio Lione on the powerful “Reflected” plus Jeff Waters of Annihilator and Therion’s Chiara Malvestiti on other cuts – adding different nuances to the strong musicianship from Enemy of Reality without dominating the proceedings.

Nightwish comparisons can come to the forefront of “Weakness Lies Within”, an early commercial offering that features an addictive musical hook right out of the gate, but the band can also throw in dramatic mood shifts through Leonidas piano/orchestration switch ups on “Taste of Defeat” that reach deeper into the neoclassical field than most of their contemporaries. Probably through the production expertise of Rotting Christ’s George Emmanuel and the band’s seasoning most will sense a deeper love of metal tonality that keeps the emphasis on darkness and dynamic diversity, even amid the operatic vocals and keyboard/orchestration layers. Adhering to a less is more vibe as far as a 49-minute timeframe appeases this scribe as well, especially in a genre where maxing out the CD constraints seems to be the norm rather than the exception.

Imagine the likes of Dimmu Borgir and Sirenia colliding headlong into symphonic metal’s expansive landscape, and that’s where the brilliance of Enemy of Reality exists. Another gem of a band, and hopefully Arakhne allows the band to reach new heights for this type of talent should be rewarded.