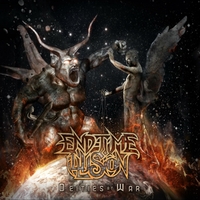 Together since 2002, Hartford, CT quintet End-Time Illusion certain have paid their dues in building their style. Deities at War is their third full-length record but first occasion for this journalist to take in their sonic wares – and by the looks of things on this 9 song effort, there’s a lot of back catalog catching up to do. A sonic cocktail that incorporates everything from speed and thrash to conventional metal, the overall platform is under the death metal umbrella – with dynamic songwriting and progressive tempos and harmonies near the top of these musicians priority list.

Expect drumming from Ioannis ‘Yanni’ Sofianos that is very tribal at times and occasionally bringing up some hardcore grooves – with tricky cymbal/snare timing juxtaposition to make “Construct of Titans” and “The Conquering Mantra” explosive, exciting, and powerful. Guitarists Dave Sharpe and Scott astound in terms of their back and forth riff skills and intricate lead breaks – rivalling a lot of the best Maiden/Helloween harmonies during “Veil of Negative Existence” while blitzing the airwaves in tapping/arpeggio nirvana for the follow up “The Dissenter”. Some of the bass play on here parallels the skill sets of Atheist’s long lost Roger Patterson or Steve DiGiorgio, giving End-Time Illusion a triple threat for searing musical interplay.

Add in occasional metal shout-a-long moments, calmer instrumental portions for diversity (check the 3:53-4:48 section of “Semantics of the Void” here) and the dual gut busting growls to screaming roars from vocalist Adam Sloan and you’ll get a record that for 41 minutes cruises in its own progressive death/thrash framework without becoming too technical – as End-Time Illusion remember that there needs to be hooks and melodies to catch the audience through every song. Imagine a great cross-section of classic Slayer, Pantera, and Killswitch Engage, if you add in the technical prowess of latter day Death, current Testament, and possibly a touch of Nile and that can give you the general ballpark of what you’ll get on Deities at War.

One of my favorite self-released albums not only in the melodic progressive death metal genre of New England, but possibly for the world this year. Recently opening a 20th anniversary Hatebreed show in their home area, it’s little surprise that E-TI are on a collision course for massive damage based on this aural piece of devastation. 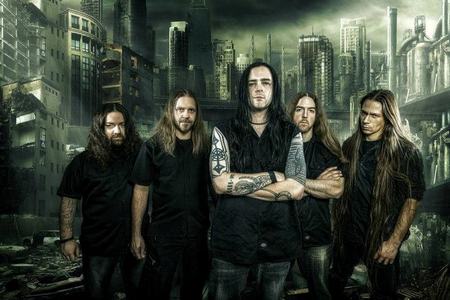