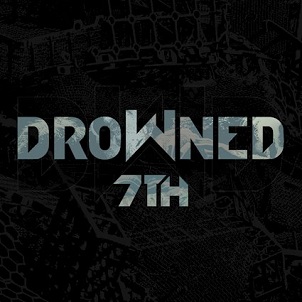 The title, as appropriate, indicates this is Drowned’s seventh full-length, a Brazilian band who hasn’t enjoyed much fanfare or exposure in these parts. By today’s standards, they’re a bit of an odd coupling, working between modern thrash, modern metalcore, steeped, somewhat, in the melodic surges from Gothenburg, not to mention a steady diet of old-school death metal brutality. But, throw it all in a blender they do, sporting a no-trigger, no-editing production job (we can tell!), which, actually, makes the thing stand out.

The fact 7th sports virtually no modern-day production elements may be a warning sign for some. After all, the over-processed, clinical, cold drum sound currently rules the day — Drowned have virtually no sign of that, preferring a natural, snappy snare, even as the double-bass playing of Beto Loureiro occasionally falls off the meter when the tempo picks up. That’s okay — again, it’s an old-school ethos, some of which picks up and goes during “Rage Before Some Hope” and “Violent March of Chaos.” However, by and large, Drowned emerge from the murky kitchen sink waters sounding largely like a more technical and involved metalcore band, just without the unnecessary clean vocals, even if they do make an appearance near the back-end of “Epidemic and God Selfishness.”

Active since 1994, it’s easy to get the idea that Drowned are at the stage where pure enjoyment overtakes the need to jump on the latest bandwagon. If that were the case, then they’d be a Sepultura redux. Clearly not the idea here. On 7th, the veteran, if not cagey Brazilians come close to spreading themselves a bit too thin, but, there’s something commendable about sticking yer neck out in places no one else will.