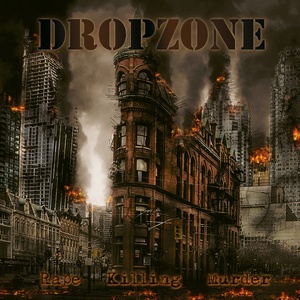 21 years in limbo. Not often does an album surface that lingered for so long. Originally recorded live on tape back in 1996 (sans lead guitars and vocal overdubs), Dropzone’s full-length Rape Killing Murder is finally officially seeing the light of day here in the end of 2017. The d-beat hardcore act is nothing if not feral, which should also find some footing in the grind community.

Clocking in at less than 14-minutes, Dropzone use time to their advantage (or lack there of) and simply ravage from start to finish. The riffing is dark and heavy, with a pleasantly abrasive tone to it, which makes it feel that much heavier. Vocally, there’s more variety than you might think from such an act but it all fits (and it’s all rather aggressive of course – shouting to higher rasping). The songs are all short and completely to the point, which is what you’d expect. “Manhunt” and “The Blood Runs in Streams” are real rippers in this regard, even owing some polish to Napalm Death in their more metallic assault. The lengthier tracks (at 2-ish minutes) offer just slightly more memorability, with the riffing feeling a bit groovier in segments. The drumming stands out as well, with the d-beats providing a solid backbone and the blasts have an urgency to them that is bound to catch your attention.

Lots of carnage to take in with Rape Killing Murder. It easily accomplishes its goal of being a musical version of a sledgehammer. It’s certifiably pissed, and it’s nice to see a release for something that was tucked away, even if it is was a long time in the making.