Down from the Wound – Violence and the Macabre (Comatose Music) 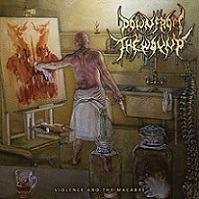 Outside of bass players (because really, no one cares what they’re doing), death metal vocals of the indecipherable kind have the easiest setup. Being that chances of comprehension of the vowels, syllables, and sadistic utterances is slim and none (and slim just left town!), any band with remote knowledge of typical brutal death metal standards can panhandle some bloke out front for a gurgle-fest, something that Philippines-based Down From the Wound have done on their sophomore Violence and the Macabre.

DR isn’t especially bothered by the near 50-minute running time, only because the 11 songs on hand sound like one song congealed together, with bit parts of squeals, Cannibal one-arm blasts, and the rudimentary happenings of early Carcass and Bolt Thrower. Expansive knowledge of the death metal genre isn’t a requirement for a band like Down From the Wound, so predictably brutal jams like “Beyond the Depths of Epidemic Abortion” (uh, what?) and “The Aftermath” wind their way through territory that was run afoul in the mid-90’s when Suffocation ideas became something along the lines of a global phenomenon. Or not.

Status-quo, standard-issue brutal death metal like this couldn’t be more limiting, but perhaps that’s why the gents in Down From the Wound have been up for the cause for 13 years. Guess there’s always some band trying to establish themselves as the most brutal thing going. Step right up…