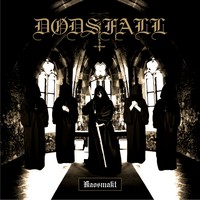 Good to see the famed Osmose Productions sticking with their roots with this one. The French label’s unbeatable run in the 90s spawned a host of legendary extreme metal bands, the most notable being Dark Tranquillity, Immortal, Impaled Nazarene, and Marduk, a four-headed monster that still resonates today. (Sadly, Impaled Nazarene are the only band left from that group.) But in order for the label to reclaim any sort of past glory, they have to build new(er) bands, which is where Norwegian extremists Dodsfall and their fourth full-length Kaosmakt come in.

Comprised of the two-dude crew of Ishtar (vocals) and Adramalech (guitars), Dodsfall sound leans heavily upon the rudiments of their country’s storied black metal past. Then again, there’s a permeation of sounds that would suggest the duo’s heart lies within extreme death metal, ala Behemoth and Hate Eternal. The brisk and not-so-subtle “Forak for Livet” would certainly uphold that notion, whereupon agile, seething guitars work in tandem with Ishtar’s lung-capacity throat scrapes. Elsewhere, the forceful “Ain” (which may or may not be named after former Celtic Frost bassist Martin Eric Ain) is another track of impact, as is 10-minute closer, “Fitte av Kristus.”

Norwegian bands, when they dip into the undeniably heavy underside of death metal usually translate well considering how conventional most of their countrymen are apt to playing things. There’s enough variety and sway to be found within the depths of Kaosmakt to insinuate Dodsfall are good enough to become a lasting staple of Osmose’s promising roster. (And, may one be wise enough to discover the treasure trove of killer releases found within Osmose’s early-to-mid-90s era. Glorious stuff.)