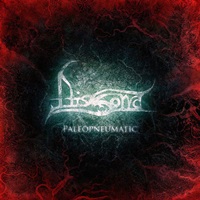 From the South Suburbs of Chicago, IL comes the four-piece act Dissona. Their second album Paleopneumatic is a rare breed in the American progressive metal scene, as the band advance their sound through a more-Eurocentric oriented scope while using a lot of cyber/technology tools to enhance their aural prism. Pulsating and driving at certain times, serene and introspective in others – the 10 tracks contain enough ideas to captivate the listener hundreds of playbacks, if not thousands.

Safe to say that after the first two tracks “Another Sky” and “Fire-Bellied” because of their use of keyboards, spacey-guitars, hypnotic melodic vocals, and creative riff blends plus dynamic tempo changes and drop offs that Dissona aren’t a mere Dream Theater wannabee 18 minutes into the record. There’s a lot of Leprous and Haken appeal, as well as everything from Cynic to Devin Townsend to Opeth plus a techno-80’s feel in some of the electronic percussion propulsion. The follow up “Outside the Skin” offers a four- minute avant-garde reprieve, imagine Nine Inch Nails/“Head Like A Hole” electro-drum segments filtering in against an acoustic foundation and David Dubenic’s cascading soft to dramatic word montage.

Total musical combustion featuring blast beats and frantic electric instrumentation, exotic phrasings, musicianship that challenges boundaries and charts a course that advanced players treasure – Dissona has this covered, while also remembering that hooks and groove factors are not only necessary but mandatory if they wish to gain a wider audience pool. Guitarist Matt Motto, bassist Craig Hamburger, and drummer/percussionist Drew Goddard deserve rapturous, sustained applause as numbers like “The Last Resistance” and ten-minute epic “Totality” launch progressive metal beyond the 21st century, incorporating divergent theories and influences and making it their own. Inspirational on horizons unimagined.

Not everything meets with approval to these ears (“Odium” has some vocal elements that are very modern rock-ish, the final track “Sunderance” at 5:49 is very ambient but prolonged for its intended effect), but that’s to be expected if swinging for the progressive fences as Dissona does. Four years beyond their last self-titled full length, Paleopnuematic challenges intellect and soul – rewarding those who listen intentionally as well as intensely.