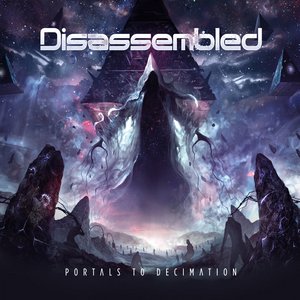 Sometimes you just can’t force a good thing to pop up before its intended time. Take Disassembled, who have put out a few shorter releases over the span of the last two decades before finally bringing about their debut album (in their defense, they did disband for a while in that time). You might never know that from hearing Portals to Decimation, as it’s ripe with modern tech death trimmings in an exciting way.

What’s most exciting about Disassembled is how they can pull off the progressive/technical aspect without going too far with it. Leaning in further with the proggier side of things, there’s just as much melody to get excited about as there is fretless bass and eye-popping riffs. Tracks like “Route to Eden” exemplify this balance, with notable bass presence and crushing riff energy, but it’s done in a way that steers the listener into more melodic territory, complete with clean(er) vocals and near-esoteric melodies. Helping things out are the chunky riffs, which bear their weight and allow some moments to feel particularly heavy (the frantic gallop and groove of “Decode 144”), while still allowing for a lighter and bouncy side to swing in and take over without feeling awkward or forced (“Traveller of Deceit”). Unlike many in the modern tech death world, nothing ever feels ‘too much’ or just there to be showy. A killer solo or lead instead feels like a icing on the cake, there to accelerate out of a melodic moment or unleash some scorching fire.

Portals to Decimation works due to a combination of factors. The musicianship is top-notch, the prog and technical balance is spot-on, and it carries the intricacy of the riffs without sacrificing the energy level of the music. It may have been a long time in the making, but it should introduce Disassembled as being an act to watch.