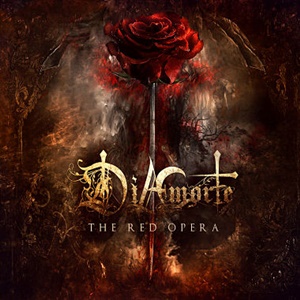 A project from Canadian musician Drake Mefestta, DiAmorte with The Red Opera channels a vivid storyline and cinematic/ theatrical scope plus numerous guest vocalists and musicians to fill out the four-year vision to execution of this symphonic metal record. Ambitious in its grandiose outlook, they say you might as well go big or go home when it comes to music of this type – and over the course of the album’s ten tracks, you will feel like you are taking in an outer galaxy effort. Featuring male and female operatic voices beyond Drake’s guttural growls, other significant guests include Mike LePond and Michael Romeo of Symphony X plus Markus Johansson of Them who supply bass and rhythm/lead guitar action.

The story entails the final days of mankind, looming darkness ahead, and the fall of two great kingdoms whose legacies fall due to years of relentless strife turning into betrayal. It’s easy to understand why multiple deliveries of the operatic and extreme arenas aid the cause to portray all the varied atmospheric and emotional twists present through the lyrics against the musical backdrop. Contrasts appear to be a hallmark as the record unfolds – “Ashes of Sorrow” opens with serene female melodies as a water stream pipes in, while attaining a heavier, mid-tempo sheen through Drake’s measured growls, the symphony/ orchestration gliding in against the twin guitar lines before acoustic guitars and quieter melodies provide a concluding, comforting moment. Conversely, specific blast beats converge on swirling theatrics and grandeur moments of uplifting splendor for “A Scarlet Misery”, as if Dimmu Borgir and Fleshgod Apocalypse were going headlong into Epica and Kamelot. There’s a bleak, colder sheen to “Theme of the Betrayer” where specific low notes in the vocals and simplified, piano/guitar work acts as an industrial chime, giving this second half track a ballad that’s out of the ordinary.

Drum programming in these project situations gives the rhythms a mechanized feel – and if there’s a future suggestion to consider, it is that ‘human’ element may add dynamics in other directions for the benefit of heightening the impact of specific songs or passages. The Red Opera strides a little more on the symphonic/bombast side of the spectrum compared to the metal leanings, but offers up a sterling example of the multi-faceted approach to the genre.