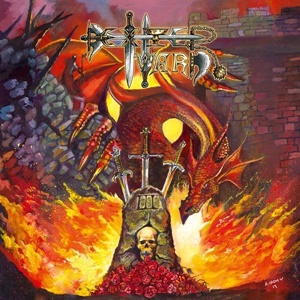 Splitting members between Greece and Italy, Dexter Ward hold the flag for traditional 80’s-oriented metal with epic strains high on their aptly titled third studio album III. Currently sharing two members of veteran Greek band On Thorns I Lay (guitarist Akis Pastras and drummer Stelios Darakis), the quintet live for a style where twin guitars gallop and rely on resplendent harmonies, main riffs and transitions that feature cultural/epic aspects to the choice of chord combinations and overall atmosphere, as well as vocal performances that recall the best power/traditional performers in the metal genre. You can expect eight songs that take on mystical, magical themes – allowing the listener to traverse ancient times that take them away to another universe.

The uplifting guitar rhythms and harmony aspects from Akis and fellow axe slinger Manolis Karazeris throughout the mid-tempo “In the Days of Epic Metal” or hard hitting “Conan the Barbarian” will make many think of 80’s-period Iron Maiden, early Crimson Glory, and spots of Manilla Road. Bassist John Luna Tsimas has a Steve Harris-like presence when necessary – helping to build the mechanics and circular musical foundation for highlight “Soldiers of Light”. As a vocalist, Mark Dexter has a dramatic flair that is unforgettable – soaring to the heavens as an epic singer should, hitting multiple octaves a la James Rivera, Bruce Dickinson, or even the much-missed Midnight during his Crimson Glory-prime. Check out the steady marching template within “The Dragon of the Mist” as well as the Maiden-esque serve and volley activities through opener “Return of the Blades” for his gritty to explosive note holding and rise to the occasion eagle high abilities without any worries of weaken the impact. Later the influence Iced Earth comes into play for “Reign of the White Knight”, some of the rhythms and tempos a bit more aggressive without sacrificing any of the melody and power to capture your attention.

Dexter Ward know their sweet spot for classic, epic metal with power and melody at hand, and spit it out in spades for III. There are plenty of metalheads globally who savor this style, even if they are cult-like in status or smaller in numbers – and as such will not be disappointed in this outing.