Dethlehem – Destroyers of the Realm (Self Released) 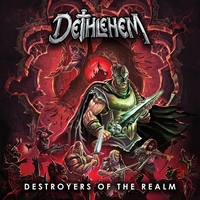 Sometimes you just have to laugh at the level of genre-fication that we have come to. Dethlehem classifies themselves as “RPG melodic death metal.” Does this mean that as you listen to it, you will level up and gain new abilities? Not having felt any of those effects yet (additional health or strength could never hurt), Destroyers of the Realm has had an effect similar to other like-minded melodic death/folk releases – repeated plays.

Hailing from Ghorusalem (which us common folk refer to as Pittburgh, PA), and having band names such as Brutalis the Bloodbeard and Grimshaw Longfellow should give you the hint that Destroyers of the Realm isn’t meant to be taken entirely seriously (as if the RPG thing wasn’t the first indication). However, there’s nothing funny about Dethlehem’s penchant for melodic death metal laced with power metal influences. Sure, it’s nothing outside the box when it comes to musicianship, but their frequently upbeat and triumphant sounding take on the genre is quite well done. It’s hard to listen to tracks like “Shadow Remnants of the Guardian Shield,” “Oathbreaker,” or “Planetary Collapse” and not raise the horns or bob the head to the memorable riffs and choruses presented. Dethlehem also frequently extend tracks past the 6-7 minute mark yet the combination of killer riffs, synths, and harsh/clean vocals make things never feel like they have overstayed their welcome.

All in all, Destroyers of the Realm is worthy of checking out for those looking for some modern melodic death metal with bite and hooks. The humor could be an added bonus if it was more integrated into the actual sound of the band, but as is, the interludes are always skippable unless you are in the mood for them. Perhaps after “leveling up” for their fourth album we’ll see an even more impressive Dethlehem.