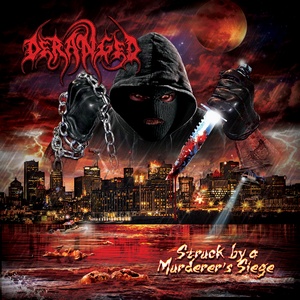 When one thinks of brutal Swedish death metal, Deranged has to be one of the first bands that come to mind. Struck by a Murderous Siege is their 9th album to date, and the second full-length following the short dissolution of the band in 2008 (and subsequent resurrection the following year). Turns out, despite a 5 year break between full-length efforts (sure, there was an EP in 2013), not much has changed in the Deranged camp – for better or worse.

Those familiar with Deranged sound need not worry. Deranged is as Deranged as they can get, as it makes little sense for them to pull an about-face at this point in their career. So you should know what you are getting before hitting play, though with Deranged’s pedigree that’s not a bad thing. After a 20+ year existence, they are just as bloodthirsty as they began, much in the way of their brethren Cannibal Corpse and Deicide (admittedly, they’ve probably fared better than Deicide). Gritty, thunderous riffing is still one of the claims to fame for the act, with uncompromising brutality summing up just about every track on the disc. To the band’s effort, they have and continue to make things interesting as they go – they aren’t an act to suffer though the death metal monotony syndrome. This is because they make some heavy yet oddly catchy riffs. Whether it’s the slower, groovier cuts like “Toy Box Torture” or the delightfully Morbid Angel-esque crawl of “Shivers Down Your Broken Spine” or the more frantic “Reverent Decomposition” the band still has the touch when it comes to memorable brutality.

Still able to command the listener from start to finish, and provide the same heavy and bleak atmosphere, Deranged have aged well. There’s no real new tricks to be had, but the level of aggression and songwriting execution that they put forth is impressive.