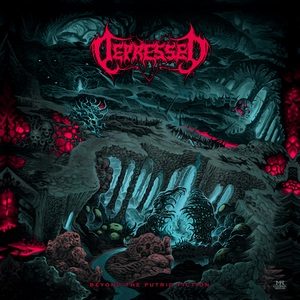 A Brazilian band that had a quick upstart and hiatus at the turn of the century, they got back together a few years back and released their debut album, Afterlife in Darkness, in 2015. Turning to the present in 2019, we now see the band’s second full-length effort in Beyond the Putrid Fiction.

Depressed isn’t any way to describe the music at hand, as it’s more rooted in brutal death metal than anything else. There’s a decidedly ‘90s flavor to the whole thing, with some mashing together of influences from bands like Hate Eternal and Deicide quickly coming to mind upon hearing a few tracks. With those two influences in mind, there’s pretty clear picture of what you can expect from the act – thundering drums, frenetic riffs, and demonic vocals that sit high within the mix. To that end, what Depressed has done is on par with the genre, but a few things keep it from being a total clone of some acts that came before it. For one, they also have a pretty solid sense of melody and scale. Some songs feel monstrous in tone, like “Cult of Treason,” which also captures a light, almost cinematic feel at times, and gives it an extra boost of brutality and grandeur. This also comes up in “Mandatory Coexistence,” where some slower sections draw out melodies and solos to riff against the otherwise frantic onslaught. Some healthy grooves are also in place, such as “Blame it on Hate,” which help give it some legs with its 42-minute runtime.

Beyond the Putrid Fiction is enjoyable for those who appreciate that more brutal, ‘90s-esque type of death metal. Depressed’s songwriting sense keeps the whole thing interesting and forward-moving, while allowing for melodies as needed.