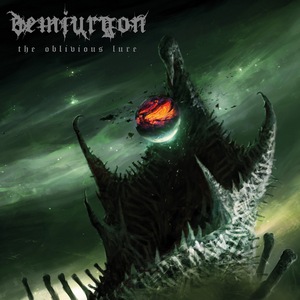 Sometimes a band’s just gotta go fast! Bands like Origin and The Kennedy Veil did well to mix in primal death metal brutality while cranking up the tempos to furious rates. It offers a rush of adrenaline to those seeking something that’s going to throttle them into oblivion. Demiurgon’s second full-length, The Oblivious Lure, has some moments that hit that same sensation, though they are also not content to simply be a one-trick pony.

The opening track, “Tsantsas,” is nothing short of a piledriver of a track. It’s short time allows it to push nothing but intensity, and it does a great job of hitting the listener with everything it has got. The remainder of the tracks here are double the length of this opener though, so it’s clear they couldn’t just unload speed and brutality for the entire listen. So in addition to the Origin-level bouts of speed insanity, they like to slow things down with some wicked grooves and more melodic moments (something akin to say, Suffocation or recent Beheaded). Just to be clear, this isn’t melodeath, but some flashy solos (see “…Dèi Dimenticati”) have some intricacy as well as melody to them, as to the pushy grooves that bludgeon as well as induce some head-bobbing. All in all, as it could be presumed, the album is quite intense, yet it gets an added jolt from the vocals. Stefano Borciani has that Benton-esque demonic quality (and upfront intensity) that shoves the music that much further down your throat.

The Oblivious Lure blends hyper-speed with some balanced groove and memorability. Perfect for those stress-relieving times that you just need a solid pummeling, but not one that is entirely faceless in tone. The type of release that cements Demiurgon as a band to watch as they move forward.