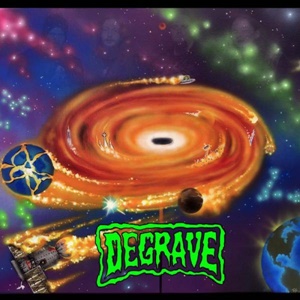 Releasing two albums in two years since their 2016 beginnings, Degrave call Jefferson City, Missouri home base and the quartet have plenty to offer through their psychedelic thrash approach on this second, self-titled full-length. We all know at this point sub-genre specification can be interpretative based on individual tastes – but Degrave sit far away from any ‘party-thrash’ associations and instead like to use progressive shifts and embellishments to conjure up a musically advanced, energetic ten track outing. You can expect songs that in parts can be calmer and easy to retain, while other sections the chaos reigns supreme, pushing intensity and combinations to their maximum dose level of tolerance and extreme angles.

Degrave feel that all instruments have equal footing for their approach – bassist Jordan Roedel often mirroring the insane speed work of guitarists Dylan Volmert and Clyde Daniels, providing that trio of steamroller action that makes “Ascension” and “New World Disorder” favored cuts. It’s not hard to hear the band’s affinity for progressive thrash artists like Vektor or Megadeth, although the lead play veers more into that Slayer/thousand notes in a measure mold, more of a self-serving aspect rather than providing context to enhance the songs. “Inside Looking Out” provides a mid-album aural breather, an 85 second clean guitar instrumental with shades of Nevermore meets Randy Rhoads appeal. There’s even a doom/groove edge to “Shades of Black” that should be further explored in future outings, as the drumming still has a bit of that off-time knack in the cymbal/double kick switch-ups to make this a standout track even when the song transitions to blasting measures. Dylan’s lead vocals possess that raspy, edge of your seat terror that made Tom Araya special and Rob Urbinati (Sacrifice) and David DiSanto (Vektor) stand apart from conventional thrash singers – one listen to “Telegraft” or the mind-melding “Grander Grandeur” tells you all you need to know in that department.

Talent is abundant – at this point though, the struggle is reigning in some of those extreme nuances that can be a loose fit for some of the tracks when a smoother approach would work best. Just because you can blast or solo at a million miles an hour, doesn’t necessarily mean you always should – and Degrave should possibly consider this on their next outing.