Deconsecrate – Nothing is Sacred (Goodlife Recordings) 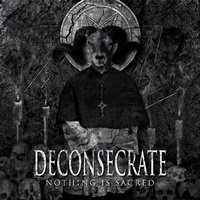 Growing up in the upstate NY region, the hybridization of death metal brutality with hardcore’s bite was basically par for the course. One has to admit that there is a real good fit between the two parts, as long as you get them right. Going too far in either direction has it’s issues: one way becomes too deathly (and what is the point of hardcore influences if they aren’t present), and the other loses the death metal edge and ends up sounding more ‘street-tough’ than anything else. Belgium’s Deconsecrate, a long distance away from upstate NY, seemingly have this down to a science.

Described in their press sheet as, “groovy metalcore with blackened death influences,” it seems the band is doing a disservice to themselves (by driving away those afraid of a little ‘core influence, that is) as the death metal is strong in this one. The riffs have plenty of serious weight to them, straddling the line between groovy Dying Fetus chugging (complete with two vocalists) to faster and thrashier riffs that retain a keen ear for melody. Speaking of Dying Fetus, John Gallagher himself does some guest vocals. You can hear more of a ‘metalcore’ influence (read: All Out War, not Killswitch Engage) in the faster moments, and it does recall the vibe of many a local band from the time of yesteryear. The end result is killer, with the album’s eight tracks doing a variety of chugging, stomping, and thrashing from start to finish. Some tracks, like “Breath of Death,” offer a bit more atmosphere but others choose musical annihilation (“Where Angels Fear to Tread”). There are melodies here, but they are effectively woven into the music in a way that they don’t slow down the overall visceral nature of the album.

A fine debut from Deconsecrate here, Nothing is Sacred takes the best of the death metal work and adds some true hardcore vibes to spice things up. The crossover potential is solid as well, which should help the band build up a fanbase whilst taking this show on the road – which should make for plenty of bruises.