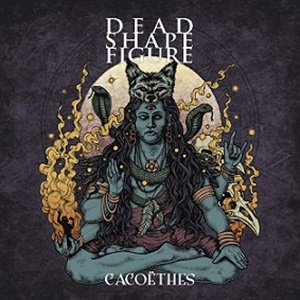 After some time scanning the playlists and genre affinities for the writers of Dead Rhetoric, it’s clear that melodic death metal finds heavy favor across the board. The reasons are numerous – the harmonic possibilities, the stirring rhythms, the varied clean to extreme vocal contrasts, and the unbridled energy that this sub-genre delivers consistently from it’s mid-1990’s development to the current breed. Sprinkle in varied affinity for thrash as well, and you have the makings of a solid foundation that delivers crushing material – which is the case for Finnish quintet Dead Shape Figure on their fourth album Cacoëthes (definition: an irresistible urge to do something inadvisable). Active since 2003 and at one point on Season of Mist for their 2008 debut full-length The Grand Karoshi, they’ve gone through natural label shuffles and membership changes as their latest recruits Niki Jurmu on guitar and Ari Niemi on bass came into the fold in 2016, five years removed from their last effort Opus Victoria.

The choirs that fade out over the cascading drum maneuvers and crunchy guitar shuffling for “The Last of the Bearing Beats” should get any lurkers swaying to the proceedings, vocalist Galzi Kallio delivering raspy acidic rants against the Dark Tranquillity/ Omnium Gatherum-ish riffs and high guitar melodies. Just as quickly, the band can ramp up the double kick/energy proceedings for “Switchblade Storm” -another forceful explosion with a half-time chorus transition that should obliterate live before returning to the thrash/death salvos the band excel at. Where Dead Shape Figure stands out is when they choose to venture into mid-tempo groove-like riff/tempo combinations, that along with a more subdued/ gothic-style vocal delivery puts “Liberticide” in rarified company, as if the best of In Flames, Draconian Times-era Paradise Lost, and Moonspell come together to make a maximum headbanging arrangement. Guitarists Juhani Ilari Flinck and Niki Jurmu slay in point/counterpoint chord progressions, layering their efforts in such a way that ears remain riveted – check out some of the combinations within “Bolt of Chaos and Creation” or the infectious closer “For the Sullen Souls” to understand their proper appreciation for the Scandinavian melodic death/thrash brigade, along with a bit of bluesy/traditional flair to distinguish themselves.

A rarity for this scribe to say, at nine tracks the record clocks in at a surprisingly short 34 minutes and change – another song or two wouldn’t have exhausted the aural experience. Cacoëthes could make many top of the year lists, and hopefully will help Dead Shape Figure more well-known as a reliable purveyor of melodic thrash/death. 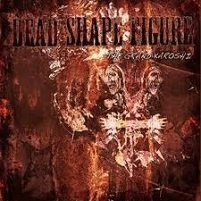