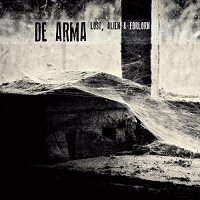 Slowdive, My Bloody Valentine, Dead Can Dance…bands that functioned outside of the metal periphery, but haven proven to be crucial in the makeup of what we have come to identify as depressive/atmospheric metal. In a sense, it’s not all Goth and gloom when we want to discuss the ways in which metal can be dark, so the touches of the 80’s still have plenty of pull, as evidenced by Love, Alien, & Forlorn, the debut full-length from De Arma.

Comprised of members of Fen, Sorgeldom, and Lonndom, De Arma on some level, could be twisted into a re-interpretation of early Agalloch, specifically their Pale Folklore album. It’s more in the manner in which vocalist F. Allain (he of Fen fame) handles his vocal patterns. Ethereal and breezy, he coats the album’s seven cuts with a distinguished sense of care, all the while adding to the overriding sense of dread and despair. Even the occasional black metal rasp excursion is well-executed, as heard on “Wretch.”

Joyless, yet gripping, numbers such as “Left to Hide” and the staggering “Watching the Walls Come Down” are memorable to the maximum degree, as plumes of hearty melodies pour out at the back end of “Watching the Walls Come Down,” making it the album’s apex.  And the brevity (just seven songs), overwhelming aura, and Allain’s it’s-a-cloudy-day-forever vocals are simply too good to pass on for those who are constantly drawn in by metal of the miserable order. Top-notch stuff; highly, highly recommended.