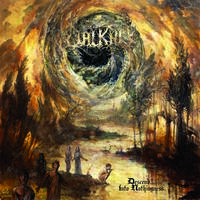 Slovenia’s blackened death crew had remained notably silent since the release of 2010’s Imperator. Five years have passed, but now the band has returned with their second effort, Descend…into Nothingness. By combining a few different approaches, Dalkhu manages to find some space within a crowded sea that they can call their own.

Descend…into Nothingness brings some notable influences that they successfully weave into the extreme metal formula. Interestingly enough, there are bits of black metal (more ‘90s Scandinavian than anything else – you can hear some slight Dissection-isms in “In the Woods”), a bit from the Amon Amarth book of melodic death/Viking metal (“Soulkeepers”), and a more traditional death metal backbone that keeps things in place. The vocals are low and quite guttural, maintaining their use as an instrument rather than doling out catchy melodic phrasings. The biggest standout here are the guitar melodies – yes, melodies that infect the often punishing material with some memorable bite. Extended cuts such as the closer, “E.N.N.F.” really take advantage of this, allowing J.G. to really take some additional time to flesh out leads into rather enjoyable moments. Most bands of this variety tend to lay out the ‘standard issue’ here, focusing on brutality, yet Dalkhu makes songs like “Distant Cry” into something more than the average with this emphasis.

Dalkhu have a winner on their hands here with Descend…into Nothingness. They can bring the malicious and bludgeoning riffs that the black/death fans crave, yet carry a nuance for melody that is bound to get them a bit more noticed by outlying fans.