Cycle Beating – The Age of Depression (Self Released) 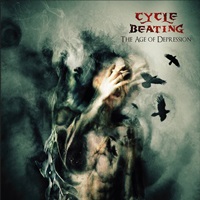 Much like the fusion of peanut butter and chocolate set about a Reese’s Cup revolution, these days it appears to be so cool to blend two or more sub-genres together in the hopes of creating a new sound. I suppose when you can’t be any faster or heavier based on where the genre’s gone, the next best thing to do is take inventory of what you enjoy and splice things together. Founded in 2012, Germany’s Cycle Beating aren’t a quartet of bikers, but more of a band who wish to push thrash, groove metal, and hardcore together on their debut album The Age of Depression.

The results are not pretty. Imagine guitar lines for “254” that resemble nursery rhymes that you can hum. Or semi-blast beats rolling over into Slipknot-like meets hardcore breakdowns on the follow up “No Regrets”. And I seriously struggled to tell apart one riff in the title track from the eighth cut “Mass Corruption”, as they all tends to begin and end with the same 3-5 chord orientations, chugga-chugga, shift, repeat, breakdown musical elements. Never mind the vocals of guitarist Robert Wagner – his semi-gruff, semi-hardcore barking doesn’t register well in either camp, as he’s not Max Cavalera nor Jamey Jasta, more like the Sesame Street Cookie Monster character gone awry.

Imagine a bad concoction of Sick of It All, Machine Head, and Unearth at 33rpm instead of 45 for you vinyl mavens – throw in lead work that makes Slayer sound like Yngwie Malmsteen and just this paint by numbers rhythm section that takes any hope of groove and runs it deep into the dirt and that’s close to what I’ve experienced taking in these 10 songs. Cycle Beating needs to seriously re-evaluate all aspects of their songwriting and execution, as they will struggle to gain much, if any, of a following beyond hometown hero worship based on this.