Cosmic Putrefaction – The Horizons Towards Which Splendour Withers (I, Voidhanger) 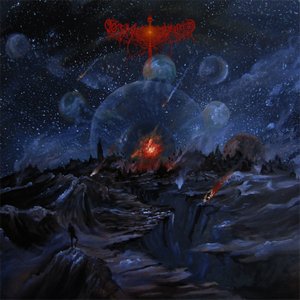 Space: the void beyond. As themes go, it pairs fantastically well with death metal and indeed several of my favorite releases over the past several years have come from Artificial Brain, Blood Incantation, and Tomb Mold (released earlier this year, Warp Chamber’s Implements of Excruciation is not to be trifled with). Horrors on a scale beyond most minds can cope with, the enormity of it all translates well to a genre that is often similarly focused on horrors, within or beyond.

Cosmic Putrefaction is the work of Gabriele Gramaglia, and this is his most recent project, having previously put out work under Summit The Clearing Path. The latter, in particular, was how I came to be introduced to his work, with 2017’s Watershed Between Firmament and the Realm of Hyperborea was one of my favorite releases of the year and remains a pillar of my listening today. At the Threshold of the Greatest Chasm, Cosmic Putrefaction’s debut, released only a year ago. In one-man band fashion, he’s very prolific.

There are several noticeable changes from the debut within The Horizons Toward Which Splendour Withers, foremost that Gramaglia now handles the vocal duties himself, but also a tangible influence of his work with The Clearing Path is on display. The savage, riff-centered approach that drives the songs remains from the debut, but the songs have been expanded with increased cleans and “ascending” passages. Traditional guitar solos, while not dominant in the debut, are noticeably absent. This is prominent in the longer songs like “Abysmal Resonance Projection”, which builds in waves across most of its length, with whatever figure sitting in its narrative center reaching an eventual apotheosis as layers of instrumentation are added.

Like the debut and his work in his other projects, Gramaglia’s production work is monstrous: “This Landscape Sublimates Oblivion to Obliteration” consumes the listener, particularly in times of transition when the bass becomes the central instrument. There is no escaping the bass. Strings and piano accompany much of the closer “Utterance of the Fall of Man”, which probably borrows more from the signatures of The Clearing Path than any other, and it is all the stronger for it. Where The Clearing Path tends to be focused on matters of ascension, however, this moves decidedly in the opposite direction. Though the void may be without form, man’s only place to go within it is down.

The Horizons Toward Which Splendour Withers is a lean listen, and at just over half an hour is a righteous exercise that welcomes repeat plays. In the void beyond, rot is all there is.