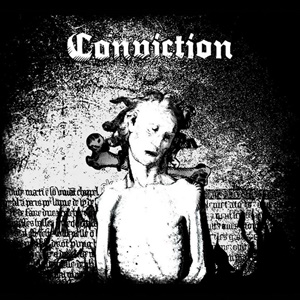 Originating as a one-man outfit and expanding into a full band, French act Conviction live for the old school doom metal movement on this self-titled debut album. Olivier Verron handled all the duties during the band’s demo and first single releases – eventually taking on guitars and vocals from that point forward to flesh out the lineup with drums, bass, and a second guitarist. Outside of a brief “Prologue: Affliction” 50 second intro, the seven main songs are mostly epic outings featuring crushing, low-tuned riffs, tempos of a resting heartbeat to maybe slow walking pace, and morose vocals with a melodic melancholy as well as whispering dynamic to switch things up.

Careful plotting out the right main sequences and slowly unfurling a second level of bluesy, emotive texture when it comes to lead breaks – aspects of classical charm against conventional doom heroes like Saint Vitus, Cathedral, and Count Raven come to mind when taking in “Through the Window” (love the wah-wah secondary solo around the 5:48-6:13 mark of this magnificent 9:42 arrangement) and the ringing, gloomy nature to “Wrong Life”. The vocal delivery from Olivier is deliberate and reflective – often using more of a lower register palate to convey sorrow, despair, and self-discovery like Fernando from Moonspell, or Pete of the late Type O Negative, “Castles Made of Shame” displaying his careful and impactful singing through the cavalcade of softer to heavier riffs that match the proceedings seamlessly. When the group decide to move the tempo up a notch for the shortest song of the record at five minutes and change “Curse of the Witch”, you get the sense that the energy elevates as the speedier chord progressions and solid groove mechanics should delight audiences to fist waving, headbanging insanity. Even the stark black and white cover plus band logo convey an older aesthetic from say the 1970’s or early 80’s versus what newer bands would deliver on that side.

It shall be interesting to watch the development of this group – having spent years fine tuning the right lineup and finally releasing this full-length. Conviction could fill that European doom slot you’ve been waiting for, as it doesn’t get much more heavy than this.