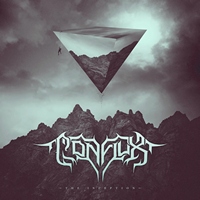 Once you get to the level of supergroup, how do you top that? Well, in the case of Conflux (or The Conflux Collective if you prefer), you keep a core of members, and allow the rest to be a revolving door of the genre’s top musicians. An intriguing idea in concept, and if The Inception is any indication of what the band is able to do, we can look forward to the fruits of this collaboration for a long time coming.

The only mainstays in the group are guitarist Chase Frasier (Continuum) and drummer Tommy McKinnon (Neuraxis), so you are starting with some very high caliber material. The three tracks all feature a number of different vocalists and bassists to round them out. To keep it from a list of cast members we’ll just discuss the vocalists. Mike DeSalvo (ex-Cryptopsy), Matt McGachy (Cryptopsy), and Elliot Desgagnes (Beneath the Massacre) lend their throats to the songs, and deliver some standout performances. Obviously, the nature of the music here is technically-flavored death metal, and the songwriting here keeps things at top speed while ensuring that you’ll actually remember what you heard later. While all three tracks revel in fantastic tech and shred, they come off as pretty varied in nature – having three different vocalists doesn’t detract from the overall flow either. As a “collective,” this is pretty cohesive while allowing some individual expression.

At just about 10-minutes in length, The Inception feels more like a teaser than anything else. But that’s just a consequence of how strong it sounds. If they continue to enlist the best of the best as they move forward with more material, Conflux could really be something special. A must-hear if you prefer your death metal on the tech-ier side of things (or you dig any of the members involved).