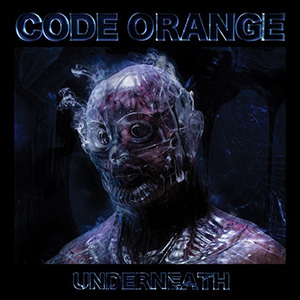 A couple years ago I stumbled onto the video for “Forever” and my reaction, like that of many, was a mix of Every Time I Die and Humphrey Bogart – HOT DAMN! A visceral thickness, creative use of breakdowns, and a general raison d’etre to demolish, with artistic flair. Code Orange won me over at that time and so it has been with a high degree of anticipation that Underneath arrives in this time of plague and isolation. Fortunately, it fucking slays.

“Swallowing the Rabbit Whole”, along the with the introductory track, served as both a single in the lead up to the album and a solid example of the biggest surprise for the band in 2020 – drummer and vocalist Jami has stepped out from behind the kit and fully into the role of frontman. Outside of live and videos, the impact of this is not to be known – his vocals were already a consistent feature in the band’s sound. The industrial elements that augmented and ornamented Forever are now fully integrated into the band’s songwriting – “Who I Am” and “The Easy Way” are both embodiments of the spirit of 1994. The latter of those two in particular features a monstrous chorus that carries the song’s escalating back-half.

Songs with a more traditional ‘hard’ bent are still very much here – “In Fear”, “Back Inside The Glass”, and “Erasure Scan” are brief embodiments of evisceration (breakdowns included). “Sulfur Surrounding” almost works as a ballad and is all the more surprising because it does work, a fitting choice right in the album’s middle. No matter the variety of songs (and at 14, there are more than enough), overwhelming force is Code Orange’s operating mantra. Whether with the raw instruments, the uncountable layers of electronics, or the frequent lattice-work of three distinct vocalists, there is always a lot going on. While the album is appropriately thick sounding befitting its bigger budget, unfortunately it’s also mixed too loud.

Underneath embodies the concept of ‘the modern’ – though it isn’t tied to a particular era. Experimentation has been part of the band’s oeuvre for most of its being and they have really leaned into it here. I’m normally not inclined to enjoy albums with this many tracks (again, 14) but as they trend <4 minutes and there is only one consistently fails to resonate (“Autumn and Carbine”), it remains a digestible listening experience overall. This album is the joy of considering what’s possible and having the wherewithal to indulge it.