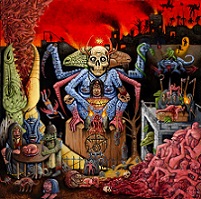 On an introductory/surface level, it would be convenient to level the Sunlight Studios tag at Dallas, TX newbies Cleric. It’s all there: The guitar tone, the sonic gristle, and waterlogged drums, but the band’s Gratum Inferno debut has more depth than those lazy comparisons. Frankly, these gents have more in common with the current wave of mystical/occult death metal bands Profound Lore has been releasing than any of the Stockholm acts. Therefore, if you look at the album through that lens, it’s certainly approachable.

Once past the opening title track (which is perhaps the most vintage Swedish death metal-sounding number in the lot), Gratum Inferno is able to make headway via the obtuse riff choices, which are coated in diabolical fuzz, almost to a black metal degree when dealing with a song like “Through the Starless Abyss.” Moments of worth including the mid-tempo stomp-turned blast-fest that is “Satanic Dimensions,” as well as the upward frenzy of “Left Hand Wrath,” which contains the album’s most sinister combination of riffs.

Stating obvious, Cleric might be facing a stacked deck considering the piles of Stockholm-inclined death metal bands parading around worldwide. But, the band has a noticeable leg up in the presentation department (the album artwork is pretty cool), and their non-traditional guitar framing should at the very least, give Cleric a nice little nudge in the right direction as they attempt to start a career in the ever-treacherous metal underground.