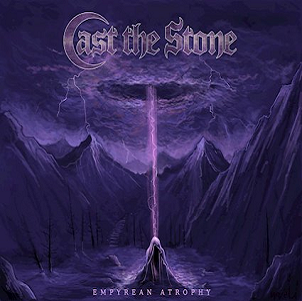 A band that was launched in 2002, released an album in 2005 (Dark Winds Descending) and proceeded to fall out of view for 13 years, you’d have to forgive the average metal-goer if they thought Cast the Stone was a brand-new band. Consisting of Mark Kloeppel (Misery Index, Scour with Phil Anselmo), Derek Engemann (ex-Cattle Decapitation, Scour), Jesse Schobel (Legend, ex-Scour) and vocalist Andrew Huskey, Cast the Stone, dare we say, is a promising, fresh death metal unit; sort of in the no-frills box, but clearly has the cache to do more than the norm, as so displayed on the six-song Empyrean Atrophy MCD.

The meaty and unforgiving “As the Dead Lie” is almost a false-starter. It’s the album’s most straightforward and brutal cut, leading into the sideways, melodic chord-going “The Burning Horizon,” which is like Novembers Doom without the touchy-feely nature of it all. But, really, it’s part of a bigger picture where Cast the Stone shapes itself as more progressive than meets the eye. The arrangements on “The Burning Horizon” certainly suggest so, while the somber acoustic guitar instrumental “Standing in the Shadows” provides the always-needed (and desired) dynamic break.

Down the line, the d-beat pummel of “A Plague of Light,” is, again, another side to the band, albeit not the preferred one. Elsewhere, the churning title track and relentless “Jesusatan” are diabolical slabs of classic Swedish DM. Fitting, since former Edge of Sanity throat Dan Swano mans the production board. So, two (or three) fronts to Cast the Stone are captured, each of which has more than enough meat and persuasion for a full-length. Really depends on which way Cast the Stone wants to go. They can’t lose.