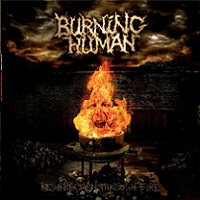 The new/old/but now side-project band of Shadows Fall drummer Jason Bittner, Burning Human takes a couple pages and then some from the creative wasteland that was mid-90’s American death metal. Bittner once again proves himself to be an efficient, if not halfway remarkable drummer, but Resurrection Through Fire might be have one too many helpings of meat and potatoes, especially now considering the over-the-top climate of modern death metal.

Good, chunky riffs abound on opener “Throes of Dementia” and the Obituary-charged “Tormented Mind” is a keeper. Bittner’s drums are heavy in the mix (as they should be) and the simple, yet brutal riffage of guitarists Mike Stack and J. Sunkes are more than capable of producing a mosh-ready whirlwind on “As Good As Dead” and “Imminent Demise.”

While the riffing is all nice and meaty and vocalist Jonah Radealli has one vicious snarl, Resurrection Through Fire hits the proverbial wall of saminess that practically every album of this ilk hits. Few death metal bands have figured out how to get through the halfway point of an album without running out of ideas or steam and it appears Burning Human, in spite of their 10-year absence, haven’t quite gotten this down pat.

With Shadows Fall gearing for a late 2009 burst, Burning Human will receive the pre-requisite attention it deserves, but don’t be surprised if this is yet another side-project/resurrection band that falls off pretty quickly. It’s solid, but unspectacular, which again, takes us back to the mid-90’s, an era that produced what could be the biggest musical log-jam metal has ever scene.