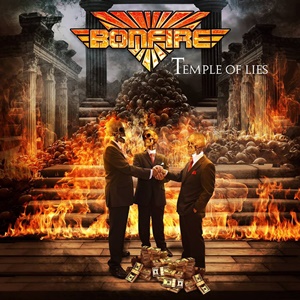 To many North American readers, Bonfire may have appeared to be a slight blip on the melodic hard rock/metal landscape during the 1980’s – Don’t Touch the Light and the follow-up Fireworks receiving major label push. Losing their record deal stateside, they’ve continued to record studio and live albums for decades for various labels in Europe – and at times had ex-members of Accept and Bloodbound in their vocal ranks as guitarist Hans Ziller remains as the lone original survivor. Armed with a new worldwide deal and a strong singer in Alexx Stahl (Roxxcalibur), the quintet with Temple of Lies appear intent on bringing that European class and songwriting strength that originally put them on the map thirty plus years previous.

Certain qualities stick out immediately when taking in the mid-tempo commercial sheen for “On the Wings of an Angel” and the catchy guitar riffs within “Fly Away” – the attention to melodic hooks and larger than life choruses, both stocks in trade for arena-level bands who really know their craft in the genre. There’s a certain 50/50 aspect to the keyboards and guitars for much of the material, but Hans knows when to just flat out drive home the perfect guitar riff, as in the “Painkiller”-esque title cut where his fiery gallop allows Alexx to rear back and attain those piercing highs that power mavens love. At other times Bonfire still live for that melodic hard rock spirit, when bands like Bon Jovi, Dokken and Ratt ruled the scene – “Love the Way You Hate Me” and the ballad “Comin Home” two sides of that coin. It’s this see-saw act cut to cut that retains interest overall – the band perfectly adept to throwing down a street level metal anthem for “Stand Or Fall”, and then putting all the vocal/musical components together to the max for another song that could easily be a top ten hit if real rock radio cared with “I’ll Never Be Loved By You”.

Temple of Lies probably won’t gain more than modest interest from the old guard- and that’s a shame, as this is high-quality songwriting that’s been long-missed in the melodic hard rock/metal community. Bonfire play to their strengths and give the listeners another solid Euro-oriented effort. 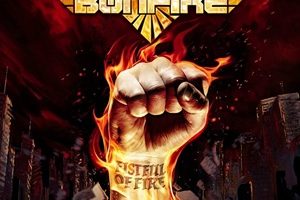