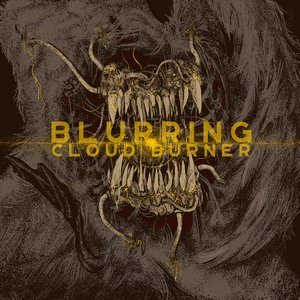 You can rely upon a release that starts with a clip stating, “I will fucking bash you in the face” to be caustic. Such is the case for the newest EP from this Rochester, NY act Blurring, who all but scream intensity over the course of this 5-song effort, which features Dan Lilker and Erik Burke (ex-Brutal Truth).

Blurring is quite possibly the best suiting name that Blurring could have drummed up. You’ve got grindcore, black metal, death metal all ‘blurred’ into one frightening beast on Cloud Burner. It’s a rather feral and face-ripping experience, where fast-paced riffing and blast beats consume much of the landscape, coupled with some equally menacing vocal work where growls and screams enter the realm of terrifying on a regular basis. Utter chaos reigns as the band never compromises from their assault – the occasional slow down here or there (see the darkly atmospheric intro to “Casket Black”) but it’s mostly pedal to the metal from start to finish. They also manage to pull off a rather ugly sound to it. You won’t find a lot of sterile sounding aggression here; it’s all the real deal. The assault is enough to render some claustrophobic at the end of the just shy of 15-minutes EP. Unfortunately that also gets to the other meaning for “blurring” here – as the chaos doesn’t leave much in the realm for melody. But, this isn’t really the type of release you listen to for those merits, so it’s relatively minor in the longrun.

Cloud Burner certainly makes the case for being a barnburner as well. The band’s grind meets black meets death philosophy is one that carries with it some originality. It might be chaos, but it definitely doesn’t sound like everyone else’s version of chaos.